.Seven-year-old Xzayvier might have a physical handicap, but that didn’t stop him from following his dreams. 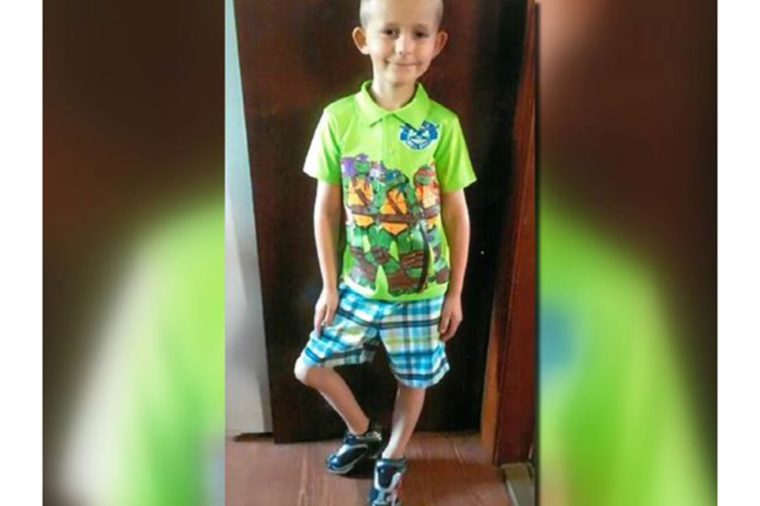 On a day in early September, U.S. Army Spc. Larry Harris was doing community service work in Grand Rapids, Michigan, when he met 7-year-old Xzayvier Buchard Mease and his parents on a sidewalk.

Spc. Harris was wearing his Army uniform and Xzayvier was starstruck—he had always wanted to become a soldier. Xzayvier asked Spc. Harris to wait while he went to find his ‘Build-a-Bear’ stuffed animal. The bear sported a similar Army camouflage outfit as Harris, and Xzavier wanted to show him.

“That’s when he told me he his life’s dream is to become a soldier, but due to his leg deformity, he’ll never be able to,” Spc. Harris told WZZM-TV. “Most kids say they want to become something one day, then two weeks later, they’ve decided upon some other career path. I could tell by looking into Xzayvier’s eyes this was something he had a high level of motivation to do.”

Xzayvier’s leg began to hurt when he was 2 years old. By age 5, he was diagnosed with a knee deformity called flexion contracture, meaning his right leg had essentially remained bent since he was born, his mother told WZZM-TV. Even after five surgeries, the handicap would be a serious obstacle to a military career.

Spc. Harris began to brainstorm ways to help. “When I took the Oath, I swore to protect domestic and non-domestic, and when I say that, I’m not always talking about going to war, or hand-to-hand combat, I’m also protecting the dream of a child as well,” he told WZZM-TV. “I wouldn’t be a soldier if I didn’t help him.”

Spc. Harris began to plan an event for Xzayvier to take place on Friday, October 14. The boy’s parents, Christine Buchard and Andrew Mease, were on board. With just a few weeks notice, he got commitments from the United States Army Reserves, the Michigan State Police, the Walker City Police, and a few Grand Rapids city officials and dignitaries; The event was a total surprise for Xzayvier.

Around 2:30 p.m. on the afternoon of the big day, a convoy of police cars and Army Humvees pulled up to Stocking Elementary School, where Xzayvier was in his classroom. Spc.Harris went up to the room and slowly opened the door. “What’s going on, man,” he said to a shocked Xzayvier. “Do you want to take a ride with me right now?” 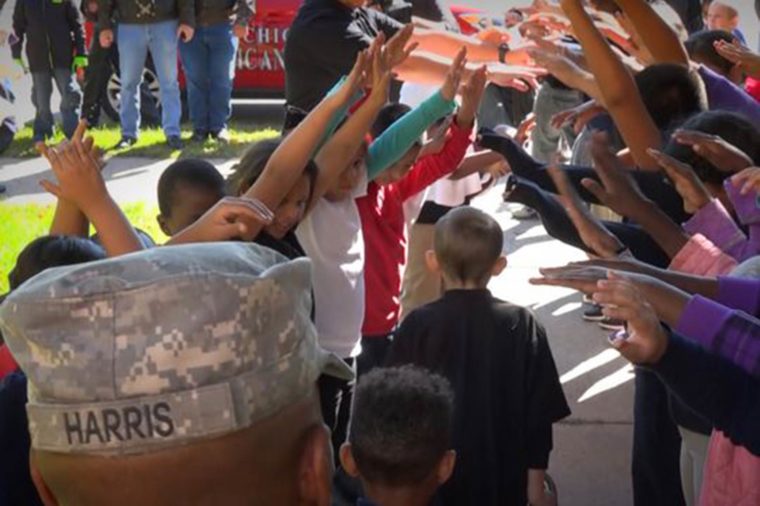 Xzayvier said yes and the two left the school and climbed into one of the awaiting cars. The convoy drove through a series of back roads before making it to the main drag, where it had the right of passage through red lights and ahead of other vehicles. When the group got to the Army Reserve Center, Spc. Harris prepared Xzayvier for the second half of his surprise—the boy was going to become an honorary soldier.

Inside, with family, friends, and Army and law enforcement personnel present, the ceremony began.

“Over the past 40 years, I’ve had the honor of swearing in several soldiers, some of whom have gone on to become generals,” said Lt. Col. Melvin Bauman at the podium. “I have never sworn in a young fella your age, but it’s an honor to do it.”

Bauman asked Xzayvier to raise his right hand. “Repeat after me,” he said. They recited the Oath of Enlistment.

“On this 14th day of October, you are now an honorary soldier,” Bauman told Xzayvier. The room erupted in applause and Xzayvier’s mother took the podium.

“I want to thank all of you for doing this for my son, letting him know that anything is possible, letting him shine today, and letting him know to never give up,” she said. “An event like this lets Xzayvier know to keep striving and keep fighting, and now he knows he’s not alone. He now knows that there are people outside who care.”

With a tear on his cheek, Xzayvier nodded in agreement. Spc. Harris walked over and shook the boy’s hand. “Welcome aboard,” he said.

It’s as simple as encouraging her students to write notes saying, “I wish my teacher knew…”

As a new teacher at Doull  Elementary School in Denver, Kyle Schwartz devised a simple way to get to know her third graders, many of whom came from underprivileged homes. She asked them to complete the sentence “I wish my teacher knew …”

Their honest responses gave the teacher a glimpse into her students’ struggles. “I wish my teacher knew sometimes my reading log is not signed because my mom is not around a lot,” wrote one student.  “I wish my teacher knew how much  I miss my dad. He was deported to Mexico when I was three years old,” wrote another.

One note that particularly stuck with Kyle was “I wish my teacher knew I don’t have pencils at home  to do my homework.”

That’s the one she posted to  Twitter in March with the caption “Reality check” and the hashtag #IWishMyTeacherKnew. Over the next few months, tweets from eager teachers poured in.

“My students are silent as they write #IWishMyTeacherKnew letters to me,” wrote a teacher from Australia. “I’m nervous to read them.”

Other professionals followed suit. Vice Adm. William Lee of the U.S. Coast Guard held an “I wish my admiral knew …” session. A counselor of adolescents in Tennessee tried “I wish my therapist knew …” Advocacy groups used the prompt to shed light on how people cope with disease (“I wish people knew that diabetes …”).

“The results have been shocking,” says Kyle of the overwhelming response to her idea. “It speaks to the importance of giving other people a voice and really listening to them.”